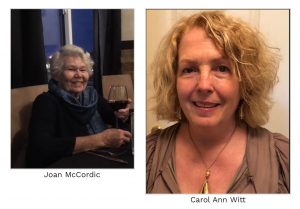 The last forum of the season was introduced by Thea Herman; Thea correctly said that Presenting the Presenters is always a very special event. We were not disappointed. The talks committee chose to highlight just two of our excellent presentations to allow for more discussion than we were able to have with the three presentations we have formerly showcased.

The two presenters were:

Joan McCordic on Cultural Appropriation from the “Art Crime: Fraud, Plunder and Theft of Culture” workshop, nominated by Cathy Spark.

Carol Ann Witt on Persuasion from the “Understanding Ourselves and Others” workshop, nominated by Thea Herman and Yvette Matyas.

Both presentations were exceptional in their excellent use of PowerPoint, fabulous content and masterful delivery.

Joan began her presentation with a picture of the Trudeau family descending from an airplane dressed in south Asian attire. I am sure you remember the furor that that caused! She gave more examples of people using cultural attributes to which they might not have hereditary rights. In particular, she drew to our attention the controversy over the author Joseph Boyden who has written novels about our First Nations people. He claims some First Nations ancestry, though this has not been substantiated. Regardless of his claims, does he, or anyone else, have the right to write about a culture that may not be their own? Joan’s sensitive arguments left us feeling that she had given us much food for thought.

Carol Ann gave us insight into the ways in which we might be persuaded to favour a particular idea or to purchase a particular product or to choose one thing over another. We often look to those in authority, or whom we perceive as an authority, in formulating our opinions. For instance, consulting the web site Rotten Tomatoes, then accepting the consensus of social media when choosing our entertainment. We may be persuaded that we must buy the latest thing quickly because it is said to be available only for “a limited time offer.” We tend to give credence to a suggestion or a piece of advice if we feel a sense of belonging to that credible source. Do we feel that Warren Buffet is including us in his family circle when he says, “I will tell you what I would say to my family today if they asked about Berkshire`s future”? Advice may be more persuasive than opinion.

Both presentations were enjoyable and informative; thank you, Joan and Carol Ann.