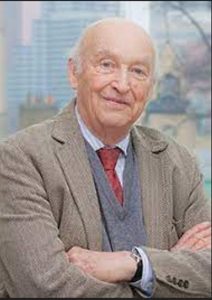 One of the foremost experts on Canada’s constitutional, aboriginal and judicial politics, Peter Russell has had a distinguished career as a political scientist and prolific author. Russell was chair of the Research Advisory Committee for the Royal Commission on Aboriginal Peoples and presently serves as Professor Emeritus of Political Science at Innis College, University of Toronto. He is an Officer of the Order of Canada. His latest book is Sovereignty: The Biography of a Claim (UTP 2021).

The purpose of Professor Russell’s talk was two-fold: to introduce us to the United Nations Declaration on the Rights of Indigenous Peoples (UNDRIP), a legally non-binding resolution; and to explain the “sovereignty” or more accurately the “sovereignties” of Canada’s First Nations.

The Declaration defines and delineates the individual and collective rights of Indigenous peoples, including their ownership rights to cultural and ceremonial expression, identity, language, employment, health, education and other issues.

Their ownership also extends to the protection of their intellectual and cultural property and “emphasizes the rights of Indigenous peoples to maintain and strengthen their own institutions, cultures and traditions, and to pursue their development in keeping with their own needs and aspirations.” It passed in 2007 by a vast majority of 144 in favour, 11 abstained and 4 voted against – Australia, New Zealand, United States and (yes) Canada.

There are over 600 recognized First Nations governments or bands in Canada and, according to Russell, 193 sovereign First Nations states, each with distinctive cultures, languages, art and music, so coming to a consensus on language was a bit of a hurdle. But the main reason for the Canadian government’s “nay” at the time was that while it supported the “spirit” of the declaration, the declaration contained elements that were “fundamentally incompatible with Canada’s constitutional framework,” which includes the Charter of Rights and Freedoms and Section 35, which enshrines aboriginal and treaty rights. In particular, the Canadian government had problems with Article 19, which requires governments to secure the consent of Indigenous peoples regarding matters of general public policy.

In 2015, the Truth and Reconciliation Commission listed ratifying UNDRIP as one of its national “calls to action.” In 2016, Canada officially adopted and promised to implement the declaration fully. At the UN Permanent Forum on Indigenous Issues, Canada’s Indigenous and Northern Affairs Minister Carolyn Bennett announced, “We are now a full supporter of the declaration, without qualification. We intend nothing less than to adopt and implement the declaration in accordance with the Canadian Constitution.”

Bill C-15, The United Nations Declaration on the Rights of Indigenous Peoples Act, was introduced to the House of Commons in December, 2020 and received royal assent on June 21, 2021 to become law. It would bring Canadian law into alignment with the UN resolution.

To be effective, Russell reminds us, sovereignty must be secured through force or consent by those living in a territory and accepted externally by other sovereign states. To be legitimate, the sovereignty claim must have the consent of its people and accord with international human rights.

Russell traced the origins of the sovereignty claim to Christian Europe and the attribution of sovereignty to God in the early Middle Ages. Transcending a narrow legal framework, he discusses sovereignty as a political activity including efforts to enshrine sovereignty within international law. While sovereignty can work well for small and vulnerable peoples, it cannot be the basis of a global order capable of responding to the major existential threats that threaten our species and our planet.

Peter Russell’s talk was a strong echo of his Innis College conversation with fellow political scientist, Professor Rob Vipond. Titled  An Unlikely Iconoclast: An Evening with Peter Russell, it is available on YouTube.

If you attended Professor Russell’s talk, we would enjoy reading your feedback. Please send feedback to ouracademy2021@gmail.com.