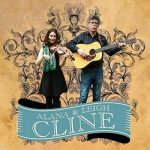 Alana Cline is a Toronto-based Celtic fiddler who combines Irish, Cape Breton and Scottish styles to create her own sounds. Her father, Leigh Cline, also based in Toronto, is a guitarist, producer and sound engineer. Alana had her heart set on being a fiddle player! Alana studied under the well-respected Cape Breton fiddler, Sandy MacIntyre, who sadly passed away on November 24, 2021.

Cape Breton Island’s fiddle music was brought to North America by Scottish immigrants during the Highland Clearances, mostly from 1750-1860. These Scottish immigrants were primarily from Gaelic-speaking regions in the Scottish Highlands and the Outer Hebrides. Although fiddling has changed considerably since that time in Scotland, many scholars state that the tradition of fiddle music has been well preserved on the isolated Cape Breton Island. Ethnomusicologists from Scotland visit Cape Breton to hear what their music sounded like in the 1700s.

Celtic music is an oral tradition; guitars came into the tradition in the 1800s. Scottish fiddle tunes encompass tunes written in certain styles such as jigs, reels and strathspey (a Scottish country dance slower than a reel). Neil Gow, 1727-1807, was the most famous fiddler of the 18th century; Scottish poet Robbie Burns was his contemporary. There was also a blending of court music of the Baroque era with the exquisite Celtic culture. Alana and Leigh played us some tunes, including “Pachelbel’s Canon,” beginning in its original Baroque style then transitioning into a contemporary version entitled “Canon Reel.” They also played the original version of “Auld Lang Syne” and segued into the more popular version with text by Robbie Burns, which is sung around the world to celebrate New Year’s Eve.

In their Zoom background, there appeared to be a life-size statuette of the HMV “His Master’s Voice” dog!

Many thanks to Alana and Leigh for their informative history of the Celtic fiddle and the joyful music they shared with us. My husband and I were both up dancing!