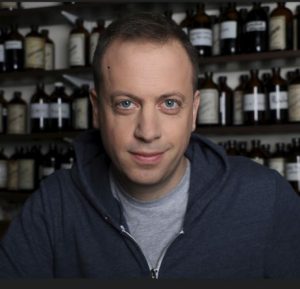 How are Cheerios, jello and Harry Potter relevant to democracy? A lively presentation by Dave Meslin at an Academy forum in March provided some answers. Dave is a seasoned social activist, self-described as a “political biologist”, who is the Creative Director of Unlock Democracy Canada, a grassroots non-partisan national campaign focused on democratic renewal. He is also the author of Teardown: Rebuilding Democracy from the Ground Up, an analysis of and re-imagining of our current democracy. He analysed some of the problems in our democracy, but also offered positive alternatives and possible solutions.

Dave is interested in how the machine of democracy works and why it seems to be so dysfunctional. Part of the problem is that, while other areas of our lives have evolved as technology and world norms have changed, the “operating system of democracy has not been upgraded”. We still operate under rules and procedures that have been used for decades if not centuries in parliamentary democracies. Tradition is embraced at the expense of innovation. This dysfunction is exemplified by the poor turnout that we typically have in elections. Usually, more voters choose not to vote than choose a particular party.

One serious issue is that politics has become a “blood sport”. Parliamentary question periods have devolved into shouting matches — an adversarial system where opposing parties aggressively abuse each other, rather than look for possible compromise. Exit interviews with MPs leaving politics have shown a common thread of shame and embarrassment at the behaviour of members in the house. Where politicians’ guiding ethical principles should be their own, their constituents’, and their party’s in that order, the power of the party whip means that the imposed positions of the party become predominant. Solutions to this problem exist: in some democratic assemblies, members do not sit in opposing blocks in the house. Rather, seating is arranged by geography or randomly, something like the sorting hat in Harry Potter. People who sit together inevitably start to develop more social relationships that foster cooperation and compromise.

A second major issue in our democracy is the first-past-the-post (FPTP) election system. The party that wins the most votes wins the seat, even if their share of the popular vote is less than 50%. In Dave’s analogy, if two parties that promote Cheerios in their platform get 30% of the votes each, and a third party that promotes jello gets 40%, the winner will be the “jello party” despite the fact that 60% of voters wanted Cheerios. In some municipal elections, the successful candidate can win with less than 18% of the ballots cast; a 35% popular vote in a provincial election can translate to a majority government. Again, solutions to this problem are already used in other democracies. Ranked ballots and proportional voting systems are just two successful examples of alternatives to FPTP. And, consistent with Dave’s view that change happens at the grassroots level, a successful municipal election was held in London, Ontario using ranked ballots in 2016.

Dave had some further suggestions for improving our democratic system, starting with our schools. The present Civics curriculum focuses on structure (which animals are on the coat of arms, the purpose of the Mace, the number of seats in the Senate), but should focus on the possibilities for individual social advocacy. Media literacy — teaching kids how to be skeptical and recognize fake news rather than expect some external organization to filter data, should be a priority. Finally, in Ontario, the June 2 provincial election is a significant call to action. It gives individuals their greatest opportunity to engage politicians in discussion of issues that matter. Even if a position does not become part of an official party platform, the candidates become aware of it and the chances for reform are increased more than between elections.

Dave is a strong believer that the individual has power in the political process and that significant change occurs at the grassroots level, not at the top levels of government. Overall, his enthusiastic, positive approach offered cause for optimism that our democracy can be reimagined. We look forward to possibly seeing him at some future forum and, meanwhile, many of us will both investigate his book and plan to engage our election candidates in the coming months.