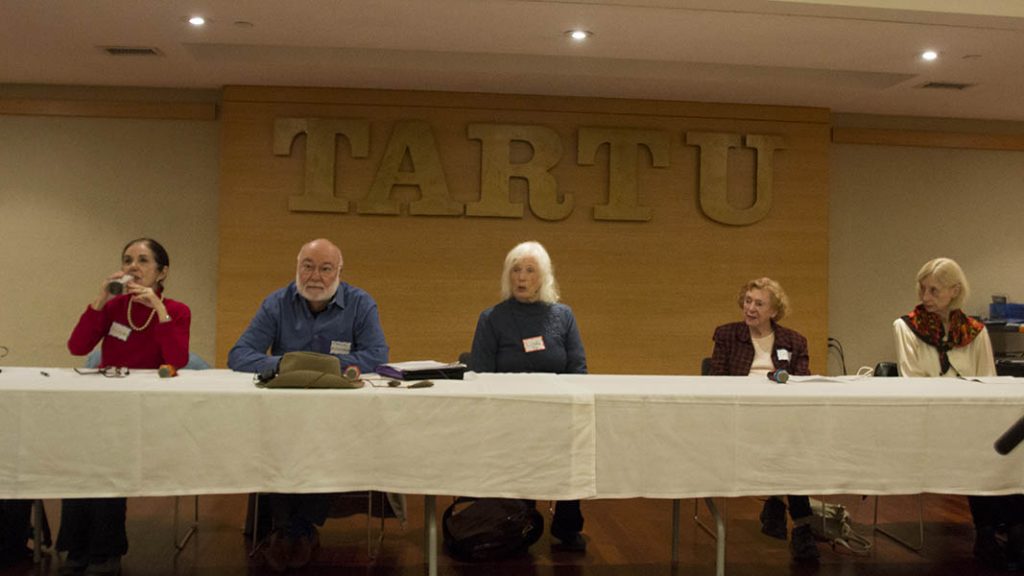 Mandy Thomson introduced the topic: “Be It Resolved that Canada is essentially a Centrist country,” centrist defined as “Adherence to moderate political views; careful avoidance of any political position that could be construed as too far right or left.”

Frank Richmond and Vivienne Monty argued in support, Patricia Cross and Sue Kralik opposed, and Linda Tu moderated.At the beginning of the debate, 27 were in favour, 4 opposed, and 5 undecided.

Frank opened by emphatically stating that in order to reach this conclusion it is necessary to compare Canada to the rest of the world and most importantly to the USA.  He set a high bar with a ten-point argument that Canada is a centrist country because:

Overall, Canada does not take positions associated with the Far Right or the Far Left. He concluded that Canada is not only a centrist country but arguably the most centrist of all centrist countries, except maybe New Zealand.

Pat’s passionate rebuttal focused on the present – that as of this moment, 2022, Canada is an angry country on a rightward drift. She sighted Conservative leader Pierre Poilievre’s support for the ‘Freedom Convoy’ that wanted to throw out the government, and his intention to get rid of  the governor of the Bank of Canada. She went on to point out that Danielle Smith, the present premier of Alberta, is not going to let her province follow the federal laws. Pat brought down the house when she stated the “Doug Ford is not the sharpest knife in the drawer.” But he is astute enough not to testify at the inquiry into Trudeau’s use of the Emergencies Act. She also stated that we as a country shut our eyes to residential schools, to stolen Indigenous land. We are afraid of famine, climate change and the threat of nuclear war – and this makes us angry. Therefore, we are not centrist.

Sue supported Pat by sighting the verbal assault that was perpetrated against Christia Freeland in Edmonton as an indication of how much the anger is rooted in conspiracy theories that thrive in the social media. The assaulter ranted that  Trudeau was part of a conspiracy that involved the World Economic Forum. “Lest we assume that these rantings are confined to a fringe group,” Sue argued, “Pierre Poilievre has taken aim at the federal policy proposal on fertilizer, the subject of rampant misinformation.”

“Anger,” she went on to state, “can lead to progress, but perpetual anger erodes the foundation of democracy by creating divisiveness, lack of trust and the undermining of tolerance. The result is extremism.”

Vivienne started her rebuttal by quoting the scholar Larry Diamond, who stated “a culture of democracy is also a culture of moderation.”  She also noted that according to a national survey, 70% of Canadians would hold an openly negative view of a politician who supported the trucker protest. Arguing against Pat’s ‘at this moment’  opposition, Vivian took a more historical perspective, stating that what happens today is not  necessarily what happened for the last hundred plus years. Our constitution holds that power should be shared and by that definition makes provincial and federal governments compromise and makes it more centrist, as does our multiparty system. We are ruled more by issue politics than by party politics.   We have a Senate, we can’t gerrymander and we’re number 7 in the world on the Democracy Index.

There were several questions from the floor, among them the following –

Sheilagh Hickie asked the Opposition why they focused on Anger as those problems are part of every democracy. Pat emphasized that their side was arguing in the moment as in “this year, we’re not centrist.” Frank’s response that the fact that the Americans think we’re socialist is proof that we’re a centrist country solicited the best laugh of the afternoon. Vivienne solicited more laughter by quoting Marshall McLuhan, “Canada is the only country in the world that knows how to live without an identity.”

Karen Melville reminded the room that the price of democracy is eternal vigilance; that we just had a (municipal) election where the turnout was only 29%; and that if we don’t address the issues that make us angry, that’s when our country will sink.

Sue’s Opposer summation reiterated the success of the Freedom Convoy, the support of Pierre Poilievre, and that Canada developed elements of political extremism as a result of world circumstances as well as national ones. Isolation during pandemic lockdown led to more time spent online and Canadians were among the most active in online rightwing extremism. Resistance to vaccinations The anger and fear are not going away.

In Vivienne’s summary in support of the resolution, she noted that historically there were lunatic fringes.  But as a country we always veered towards the centre.  Our healthcare system, our social programs, the way we vote have always provided that balance. Richard Wagner, the head of our Supreme Court, said, “We are not politicians. We are equal but different. We are meant to keep each other in balance.” Frank added in closing, “The fact that we view Alberta politicians, conspiracy theories and the Truckers Convoys as being fringe, that’s the proof the country is in the centre, that we’re centralists because we view all these as fringe players.”

In the end 28 voted pro, 4 remained con. The pros won. It was a very enjoyable afternoon. Thanks to Mandy Thomson and her team.